In recent years, significant changes in the distribution of the production of technological innovations have been noticed around the world. Until recently, the development of the most important innovations is concentrated in the countries of the well-known Triad (US-Canada, European Union (EU) and Japan). However, other nations have been rising on the world stage of innovation, and some of the main ones are part of the BRICS — Brazil, Russia, India, China, and South Africa —, especially China. In this text, we intend to show that China has been making significant efforts in terms of investments and science and technology (S&T) policies, which not only points to possible lessons for countries such as Brazil, but also addresses the challenges of a process of technological change that may have global repercussions.

Since 1978, China has been developing a series of major reforms in the S&T sphere that has improved both higher education and research and development (R&D) activities in the country, mainly through the Central Government’s Five-Year Plans. However, that strategy of scientific and technological development underwent a major change after 2008, towards increasing the nation’s control over technology. With the outbreak of the global financial crisis in that year, China’s formidable economic growth, given the high and constant growth rates of its Gross Domestic Product (GDP), suffered a setback that had a negative impact on its economy, which was driven by industrialization and focused basically on the adaptation and imitation of traditional technologies of the developed countries. The Chinese, pressed by such situation, reacted by building their own framework for innovation and improving the competitiveness of national research institutions. Thus, innovation in China has been playing an increasingly prominent role in economy, and Chinese companies have been pursuing innovation through R&D and international partnerships.

In the context of deep changes, China has been involved in two initiatives regarding the development of S&T policies: the Five-Year Plan (2011-15) and the National Plan (2006-20). The Five-Year Plan has brought in US$1.7 trillion to several strategic sectors in technological terms, including renewable energy, biotechnology, efficient and environmentally friendly technologies, electric cars and a new generation of Information Technology (IT). On the other hand, the National Plan, of medium and long terms, aims at tackling what is perhaps China’s toughest challenge, which is to enhance the innovation capacity of its business sector.

Despite the challenges, China’s excellent performance in S&T investments in its own territory is evident. We can notice a staggering increase in R&D spending, as investments rose from just over US$41 billion in 2000 to more than US$344 billion in 2014, an eight-fold increase in the period (Figure 1). In this matter, China has already surpassed the expenditures of the European Union (28 countries) and only lags behind the United States. In addition, if the investment growth trends of China and the US remain constant, the Chinese may surpass the Americans by 2019 (projection of the Organization for Economic Co-operation and Development (OECD)).1 Also, we can stress the steadiness and the pace of growth of the Chinese investments compared to those of other developed countries and the whole EU. 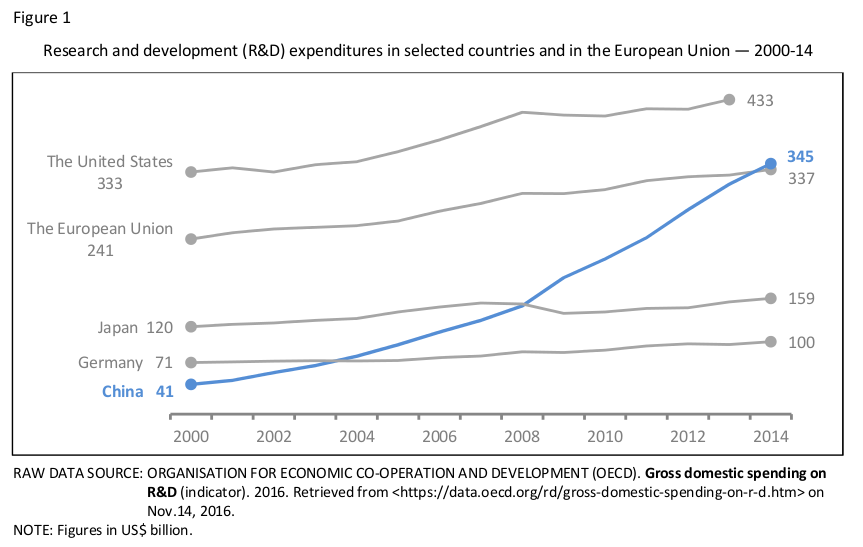 It is also worth mentioning the percentage of this type of spending in relation to the GDP, although it is not the highest one among the countries analyzed (Figure 2). In fact, this relationship has grown more robustly in China, while the figures in other nations have seemed to oscillate, which happened especially between 2008 and 2012. The Chinese reached the ratio of 2% in 2013, keeping the upturn in the following year, below the average of the OECD countries (Japan, the USA, many European and other developed nations), but higher than the EU average. Although the Chinese have a R&D/GDP ratio below the EU target of 3% (as set in the Lisbon Strategy, of the European Commission, and the Europe 2020 plan), it should not be ruled out that they may reach that rate in the coming years. 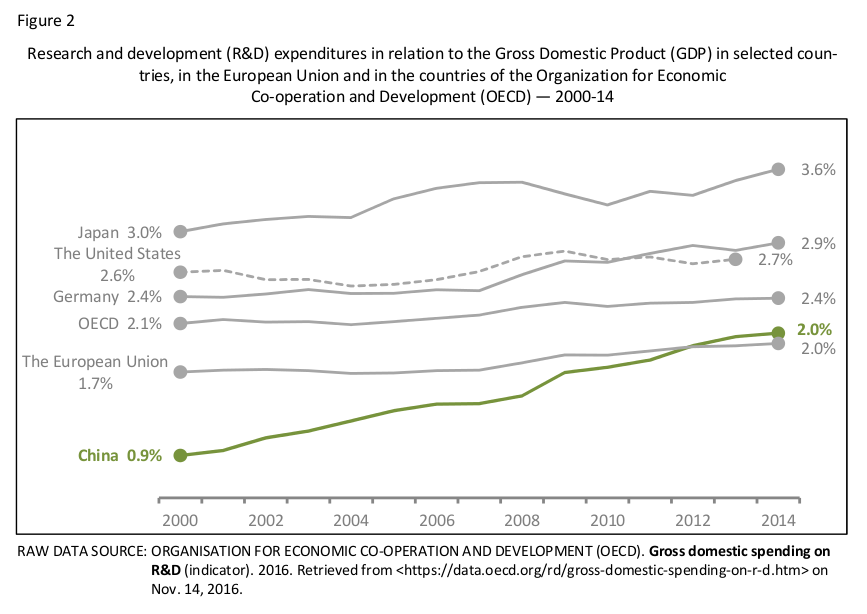 Despite the positive general picture, it is important to emphasize what experts in innovation studies and policies keep reminding us: increases in R&D expenditure alone do not guarantee a greater generation of innovation, especially of the more radical type. Therefore, it is also important to analyze some attributes of the Chinese S&T policies that show a strategy that is both ambitious and visionary in terms of innovation, as well as the difficulties inherent in the process. First, the key milestones of these policies are oriented to address the most serious social challenges in China through innovation, such as food security, public health, aging and disaster prevention. Furthermore, China has been boosting inclusive innovation processes in its territory, which are for and/or (produced) by the low income population. One example is the Spark Program, which aims to promote agriculture and rural development through the access to new technologies and their training, and the S&T Program for Public Welfare, which seeks to promote the marketing of technologies that can benefit social development, both run by the S&T Ministry. Such inclusion policies may have a great impact on the Chinese economy and society, leading to the emergence of a large contingent of consumers and professionals increasingly qualified (and interested in innovating).

Secondly, we point out the geographic organization of innovation within China, where innovation poles can already be detected, some of which are of global reach. Among the main ones are the cities and their respective provinces, such as Guangdong, Beijing and Shanghai, where around 73% of the country’s patents are concentrated. This fact clearly evidences the question of the Chinese concentration of scientific and technological capacity, which is a problem in the light of a pertinent survey of economic geographers of the London School of Economics.2 The study shows that the distribution of innovation in China is driven by the forces of agglomerations (population, productive specialization and infrastructure). However, instead of generating a diffusion of technologies (which would be positive), the more developed regions induce negative effects on the development of the others.

The third and last feature is China’s commitment to developing technology within the “green” (or clean) revolution — a major technological change that is expected in the coming decades by some experts in innovation studies. The main area of “green” technology promoted in China is renewable energy (solar, wind, etc.), which is evidenced by the high investments in this area, one of the largest in the world (Graph 1). Since 2014, China has been leading the expenditures on R&D for this type of energy — in 2015 alone, more than US$100 billion (almost 36% of all global investment) were spent. Moreover, other important countries in the development of these technologies — such as Germany, Finland, France, Denmark and Norway — have also been investing, but to a lesser extent than the Chinese, while the United States and the United Kingdom have been showing a hesitant attitude towards these investments. It is noteworthy that, beyond investments, China has adopted a similar approach to that of Germany, which understands the “green” technological transformation not only in terms of technology, but also as economic and social change — green production and lifestyle —, which establishes sustainability (the control of pollution and waste) as a competitive advantage. 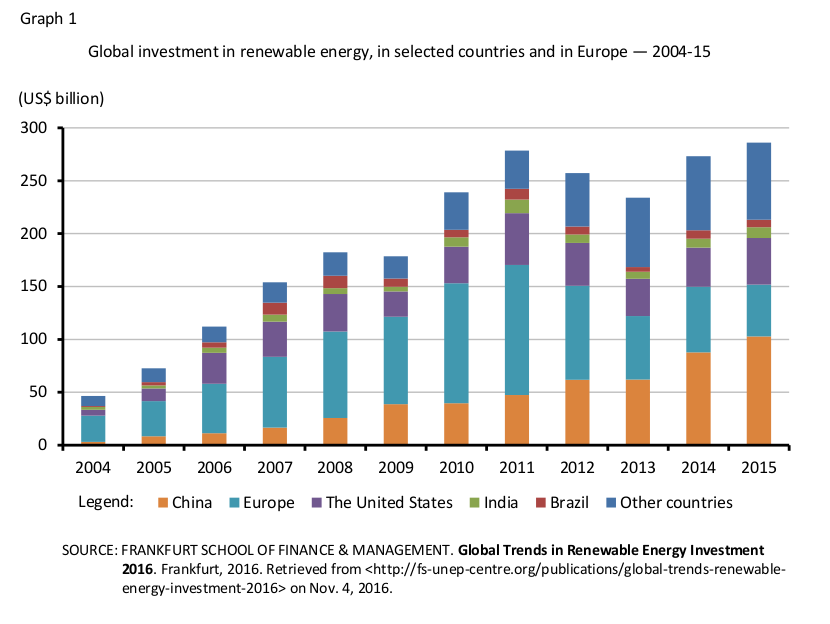 However, China is unlikely to accomplish a “green” technological revolution alone, especially in an increasingly globalized world. And that is worrisome in the context of a persistent global crisis, in which the United States remains faltering in R&D on clean technology, and the attention in the Eurozone is being directed to economic austerity policies and not to real solutions, which could be the way to innovation in green technologies. Brazil cannot be overlooked in this respect. Its importance becomes evident in Chart 1, which shows its strategic investments in renewable energies and its participation in the BRICS, especially with the possibility of China being a preferential partner, which depends on the next steps of Brazilian economic and technological policy.

To conclude, two issues remain unsolved regarding China’s role in a probable ongoing technological revolution. The first one is related to the problem of the lack of a competitive business environment favorable to innovation, as described previously. Some analysts indicate that one of the main pillars of this problem is the absence of risk capital and, consequently, the business environment is unfavorable for innovative startups (emerging companies in specific niche markets). This problem has its origin in the predominance of state-owned companies with little interest in innovation and, as a consequence of this, in the absence of competition between companies, which prevents the emergence of a proper environment for innovation. However, this analysis is partly misleading, because the role of the state is underestimated, as it is unfortunately a commonplace in the business sector and in the public opinion in general. An important group of researchers on innovations has demonstrated the relevance of the state as a direct and indirect inducer of the main innovations in the world, especially in the case of the United States, where major technological breakthroughs (such as those in microcomputer science) occurred in the convergence of the state with the private sector, and not with private risk capital as the encouraging force for innovation. A well-grounded discussion on this theme is found in the book The Entrepreneurial State: Debunking Public vs. Private Sector Myths, of the Italian-American economist Mariana Mazzucato, published in Brazil, in 2014.

The possible solution to this problem is to make changes in Chinese institutions and organizations to make them more flexible, which inevitably involves decentralization, a path the Chinese government has not shown any signs of following yet. This situation leads to the second issue, related to the technological role of China in the world. The history of technological change in the world shows that technological revolutions very often occur and are reinforced by some degree of social and economic inclusion of the population of their respective regions of influence (increase in the consumer market, greater qualification of the workforce, etc.). In this sense, China has shown that it is following the path of promoting inclusive innovations, that is, innovations aimed at the low-income population and/or developed by that stratum. Therefore, that is another reason for us to keep a close eye on that Asian country, which will soon take the lead of the world’s technology board.

1According to the last OECD Science, Technology and Industry Outlook 2014, a biannual OECD publication on the main trends in science, technology and innovation in the world. 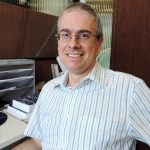