The international insertion of Brazil during President Lula’s two terms and, to a lesser extent, President Dilma Rousseff’s first term was marked by the diversification of its international relations without compromising its relationship with traditional partners such as the Americans, the Europeans and the Japanese. However, unlike the period under review, the current scenario of strong deterioration of the national economy and severe restraint of public expenditures, both at the federal and state levels, poses challenges to the country’s capacity to establish complementarity criteria in its relations with China.

While the major powers experienced the effects of the severe economic crisis of 2008, the first decade of the 2000s was marked by the leading role of emerging countries in the international scenario. Within the context of a sharp rise in the prices of their main exportable commodities, the emerging countries sought, with reasonable success, to implement policies capable of generating a certain domestic economic dynamism. In this scenario, Brazil, Russia and China stand out. The economic growth of these nations, along with that of South Africa and India, has projected them internationally granting them a certain power of articulation of their interests in international forums like the BRICS itself — Brazil, Russia, India, China, South Africa —, the financial G20, the commercial G20, the World Trade Organization (WTO), in addition to the various agencies within the United Nations (UN), such as the United Nations Conference on Trade and Development (UNCTAD) and the Food and Agriculture Organization of the United Nations (FAO).

In this process, besides being nuclear powers, China and Russia give a strategic weight to the emerging countries as a whole while defending their respective agendas in the UN Security Council, in which they have a permanent seat and veto power, elevating them to the category of players of the global geopolitics. However, in the economic field, China stands out from other countries, developed and developing ones, by the strength that results in impressive trade surpluses, levels of economic growth, international reserves and investment volumes worldwide.

Brazil resumed diplomatic relations with the People’s Republic of China (PRC) in 1974. Since then, the Asian country has increased its share up to the point of becoming the main destination of Brazil’s exports. In 1985, these exports reached US$817.5 million. Ten years later, this value reached US$1.2 billion, and the export agenda was composed mainly of manufactured and semi-manufactured products. From then on, the basic products have been consolidating themselves as the main items in the Brazilian export agenda to China. In 2005, the value of exports reached the sum of US$6.8 billion. Since 2009, China has been the main trading partner of Brazil, taking over the position that used to belong to the United States. That year, the Chinese imported US$21 billion. In 2013, this figure jumped to US$46 billion, as shown in Graph 1. Since then, China alone has been the main destination of Brazil’s exports, competing with the European Union, Latin America and the Caribbean. 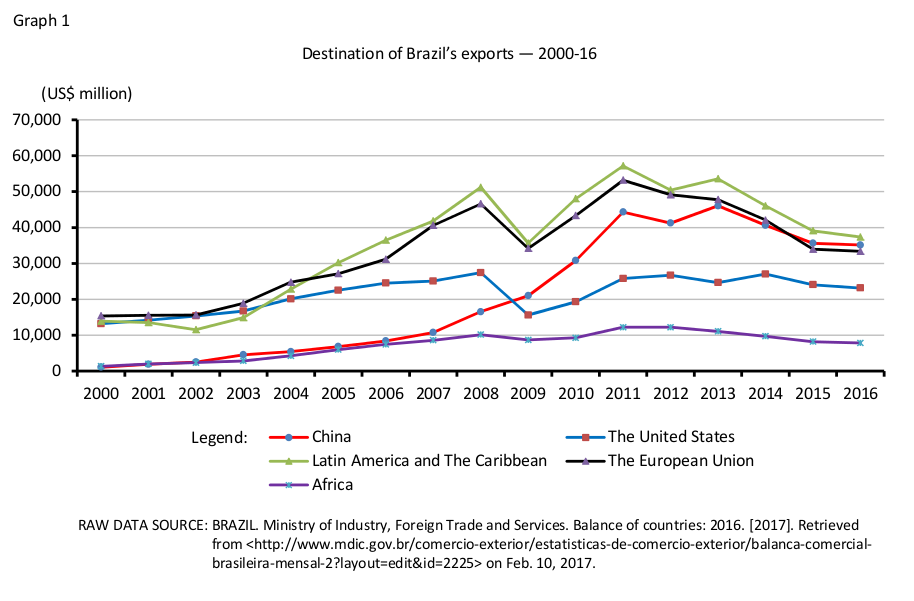 Regarding direct investments, data from the Central Bank of Brazil show that, between 2010 and 2014, the distribution of direct investment stocks in Brazil (equity share) showed the accumulated average value of US$577.9 billion in the period. Out of this total, we have the following average percentage among the main investing countries: the United States (20%), Spain (12%), Belgium (8%), the United Kingdom (7%), France (6%), The Netherlands (5%), Japan (5%), Germany (4%), Italy (3%), Switzerland (3%) and China (2%).1 Although in this area Brazil depends on the decision-making agendas of the United States, Europe and Japan, the bilateral relations between Brazil and China, which have become closer within this recent dynamics of construction of national development projects, have consolidated the Asian partner as a pragmatic and strategic alternative to attract foreign resources for investments in Brazil.

The recent wave of Chinese investments in Brazil calls people’s attention. According to data from the American Enterprise Institute and the Heritage Foundation2, the Chinese invested US$51.7 billion in Brazil between 2005 and 2016. The investments involved the following sectors: real estate, energy, agriculture, chemicals, technology, metals, transport and finance. According to the data in Figure 1, the energy sector attracted the most investments. In this segment, Chinese companies invested a total of US$38.15 billion in the period. Next, there come metals (US$4.39 billion), finance (US$2.11 billion), agriculture (US$1.93 billion), transportation (US$1.81 billion), real estate (US$1.36 billion), chemicals (US$1.5 billion) and technology (US$450 million). 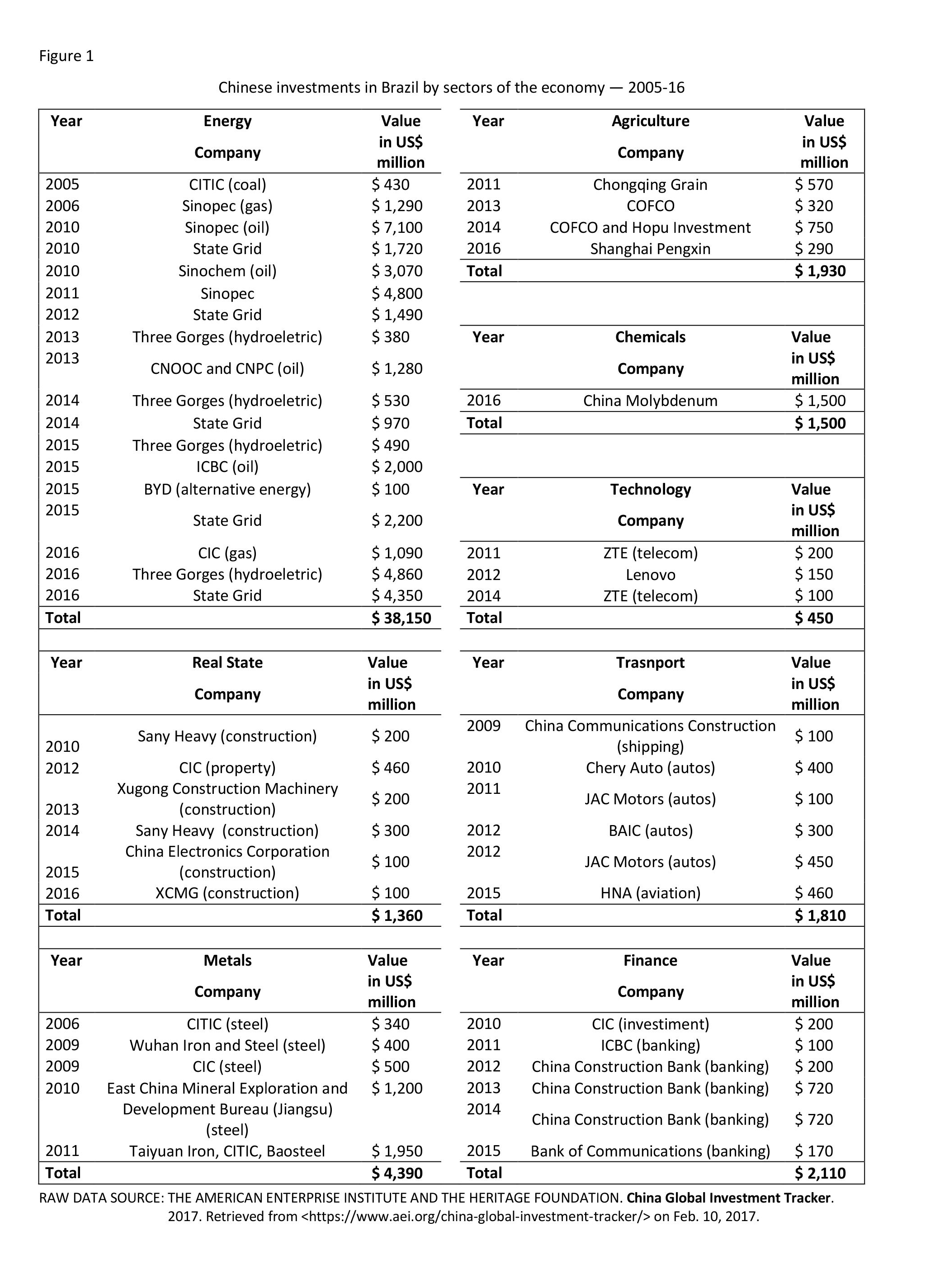 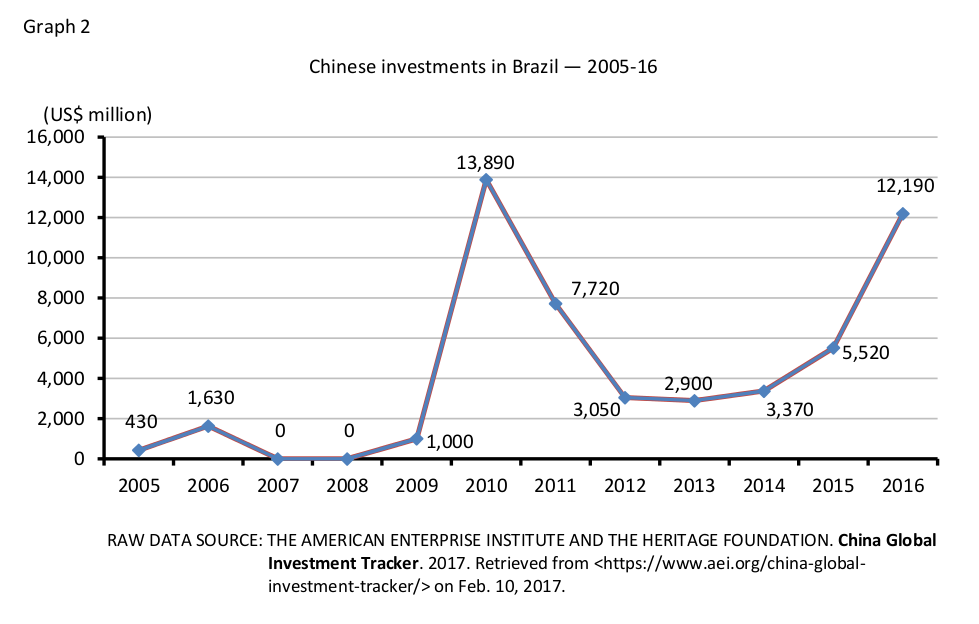 It is necessary to emphasize that over the last 15 years, the effort made in the consolidation of strategic partnerships between the two countries has sought the complementarity of their national policies in the areas of economic development and international relations. In this sense, although during Dilma Rouseff’s term the domestic political and economic constraints relegated Brazilian foreign policy to a secondary level, the cooperation projects between the two nations, in the BRICS or in other international forums, were maintained. However, the aggravation of the country’s economic and political crisis in the last two years raises questions about the role that China is playing in President Michel Temer’s administration.

The alignment of the current government with economic orthodoxy based on a severe fiscal adjustment that will limit the ability of the federal government to implement policies of public investment in strategic areas for the national development for 20 years emphasizes the secondary role that Brazil must be playing in this new phase of its relationship with the Asian giant. Dismantling national content policies which enabled, for example, the emergence of Rio Grande naval hub, in the State of Rio Grande do Sul, shows the deconstruction of complementarity links that, until then, had characterized Brazil’s role in the construction of its bilateral relations, especially those within the South-South cooperation framework.

At the state level, Rio Grande do Sul emulates the current federal dynamics in its relations with China. Although direct foreign investments have a significant impact on the generation of employment and income, it is the long-term strategic complementarity projects that have the potential to produce lasting effects in the areas of economic development.

The fiscal adjustments made by the state government limits the ability of Rio Grande do Sul to establish long-term strategic partnership projects with China in the areas of economic development and also in the areas of culture, education, science and technology. The extinction of public research foundations restricts the possibilities of further strengthening of Rio Grande do Sul’s relations with China beyond the purely commercial approach. In the same way that the Brazilian Agricultural Research Enterprise (Embrapa) established cooperation agreements with the Chinese Academy of Agriculture Science (CAAS) in 2012, it is believed that similar agreements involving the state’s research foundations and the various research bodies of China could be consolidated as interfaces for the development of mutual interests involving the Chinese and the people of Rio Grande do Sul in their respective areas of knowledge.

In 2017, still in the context of the state’s adjustments of public accounts, the Chinese energy company, State Grid, started to take control of CPFL Energia and be in charge of two-thirds of the energy distribution in the State of Rio Grande do Sul. The company of the Asian country owns Rio Grande Energy (RGE) and Rio Grande Energy — South (RGE Sul). It is worth remembering that, in a context of attack on the quality of services provided by state-owned enterprises, State Grid is a Chinese firm 100% state-owned and a strong candidate to buy the electric power company of the State of Rio Grande do Sul (CEEE), in case the company is really privatized, as the state government wishes. In addition, there is still a possibility of privatization of the Mining Company of Rio Grande do Sul (CRM). The state owns 86% of the country’s coal deposits. In this case, the Chinese companies Zhejiang Electric Power Construction Co. (ZEPCC), State Grid and China Three Gorges (CTG) present themselves as potential buyers of the state’s mining company.

At the current juncture, both the federal and the state governments see Chinese investments as a short-term relief in the search for solutions to their respective challenges to adjust their public accounts. The partnership with the Chinese should be perceived and instrumentalized as a long-term bilateral and systemic cooperation strategy. Therefore, it must be stressed that international relations are first and foremost governed by national interests, and cooperation is the means by which the countries’ interests can be satisfactorily served. Thus, it is understood that, by overlapping the fragility of the public accounts with broad projects of cooperation with the Chinese, there is a risk of restricting a strategic bilateral relationship for the country to mere trade and investment agreements without major counterparts from China for the development of Brazil. Within this immediacy and subservient dynamics, China will have no incentives to cooperate and no constraints on maximizing the opportunities of investment in Brazil and in Rio Grande do Sul — these opportunities, taken as a whole, will consolidate themselves as a gold mine for the Chinese. 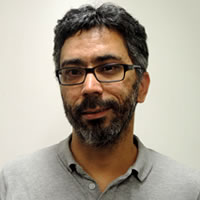